Previous studies have found that people are able to successfully attribute personal characteristics and qualities of others, such as dominance, masculinity and physical fitness and aggression on the basis of certain traits and the overall morphology of the face. However, research conducted so far on the evaluation of aggression, was based on respondents’ answers or questionnaires, but it is unclear whether this rated aggression occurs in real-life situations. In our research we have for this reason tested,  whether there is a relationship between the ability to withstand physical confrontation and the characteristics of the human face. In other words, if it is possible to predict the real ability of a man to compete against an opponent. More than 650 respondents participated in the main study titled Relation of Human Face Morphology and Ability to Compete in Physical Confrontation. The study consisted of evaluating a set of 146 portrait photos of men, professional fighters of mixed martial arts, the so-called MMA  contestants in the American UFC organization. Each participant evaluated a randomly compiled set of 50 photos on a scale of aggression.

The results show that aggression attributed by men and women based on the presented photographs of the wrestlers, correlates with the success rate in the completed matches only in heavy weight categories. The success rate of physical confrontation is probably correlated with the level of testosterone, which is related to aggressiveness and can be significantly manifested in the morphology of the face. For lighter weight categories, it is obvious that other skills contribute to the success in physical confrontation (eg agility and speed) which are not necessarily manifested in the morphology of the face. 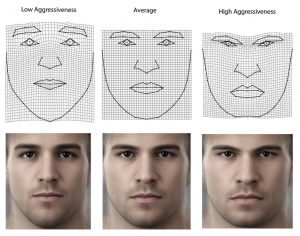 The results of this study have been presented at several international conferences, in Czech popularizing articles (iForum, Psychology today) and in a foreign scientific article (Psychological Science). The assessment was also collected in Brazil and Cameroon. We will continue to inform you about the results and conclusions of this study.