New paper! “Predictors of fighting ability inferences based on faces”

Facial perception plays a key role in various social interactions, including formidability assessments. People make relatively accurate inferences about men’s physical strength, aggressiveness, and success in physical confrontations based on facial cues. The physical factors related to the perception of fighting ability and their relative contribution have not been investigated yet, since most existing studies employed only a limited number of threat potential measures or proxies. In the present study, we collected data from Czech Mixed Martial Arts (MMA) fighters regarding their fighting success and physical performance in order to test physical predictors of perceived fighting ability made on the basis of high-fidelity facial photographs. We have also explored the relationship between perceived and actual fighting ability. We created standardized 360° photographs of 44 MMA fighters which were assessed on their perceived fighting ability by 94 raters (46 males). Further, we obtained data regarding their physical characteristics (e.g., age, height, body composition) and performance (MMA score, isometric strength, anaerobic performance, lung capacity). In contrast to previous studies, we did not find any significant links between the actual and the perceived fighting ability. The results of a multiple regression analysis have, however, shown that heavier fighters and those with higher anaerobic performance were judged as more successful. Our results suggest that certain physical performance-related characteristics are mirrored in individuals’ faces but assessments of fighting success based on facial cues are not congruent with actual fighting performance. 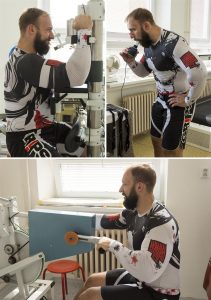